Departure from the port of Valletta at 1700hrs.

- 100% made in Italy pizza, with high-quality ingredients and the genuineness of dough made with leavening prepared with mother yeast.

- If you are sporty, you can keep in shape in the gym equipped with the latest equipment and large windows that overlook the sea.

- The pleasure of a vacation is also provided in dishes for celiacs, allergy sufferers, vegetarians, and vegans, without sacrificing taste and creativity.

The cradle of Greek culture, Athens welcomes us to its port of Piraeus, watching us from above the wonderful Acropolis. Piraeus is the port of Athens, the largest in Europe, allowing you to visit the city, a place of dreams. A place of emigration, it has inspired numerous songs.

Excursion:- Panoramic Tour of Athens (Duration: 5 hours).
A fascinating coach tour of Athens that offers the perfect opportunity to see the city's main attractions and learn about key events in the country's history in complete comfort.

The cliffs of Santorini island shine with the bright white reflection from the houses that dominate the Mediterranean from the top of their summit.
Upon arrival at the port of Santorini, you will be enchanted by the charm of the lagoon that surrounds this beautiful volcanic island. The harmony between the crystal blue water and the white villages located at the top of the cliffs is exceptional. Make the most of your trip to Santorini by visiting the lava beaches. Their black colour makes them truly spectacular. Archaeology lovers should not miss the chance to visit Akotiri. Excavations have unearthed Minoan ruins and a city that dates back to the Cycladic civilization.

Excursion:- Beautiful Oia & Fira (Duration: 4 hours).
Perched on the cliff tops the village of Oia surprises us with its typical white houses, narrow alleyways, terraces decorated with flowers, and traditional shops. The morning ends with a visit to picturesque Fira, the island's capital: a treat for the eyes and the soul. After admiring the stunning panoramic views, you will rake the cable care (extra) back to the port.

- Everything you need for your beauty routine: facial masks to refresh and tone, depilation and manicures.

- You can purchase beautiful gifts on board, and everything that you may need for your cruise.

- The ancient art of massage has always been practiced to relax and tone your body. On a Costa ship, you can expect enhanced relaxation.

Bari is the Sun of Italy. In its beautiful old town are many churches, while the ladies prepare the famous orecchiette on tables in the street. The port of Bari, on the Adriatic coast, is primarily a passenger port. During the stop in Bari, visit this historic city and its surroundings, especially Matera, designated by UNESCO as the 2019 European Capital of Culture. “Bari Vecchia” is the old part of the city that, with its partly Norman and partly Swabian fortress, the Romanesque Basilica of Saint Nicholas built on the ruins of the Byzantine Palace, the 12th century cathedral of San Sabino and a dozen little churches of the same period, still bears the traces of conquerors who succeeded over the centuries.

Excursion:- The 'Sassi di Matera' (Duration: 4.5 hours).
An excursion dedicated entirely to Matera, the so-called 'citta' dei Sassi' (literally 'city of stones'). Its cave dwellings beeing dug out of the rock, were declared both a UNESCO World Heritage Site and European capital of culture for 2019.

Excursion:- The ''Trulli'' of Alberobello (Duration: 5 hours).
A great opportunity to visit Alberobello's famous Trulli: traditional, cylindrical buildings that are unique to this region and have been part of the town declared a UNESCO World Heritage Site. Immerse yourself in the magical atmosphere of the old rural tradition that exudes every nook and cranny of this fairy-tale setting.
Perched on the cliff tops the village of Oia surprises us with its typical white houses, narrow alleyways, terraces decorated with flowers, and traditional shops. The morning ends with a visit to picturesque Fira, the island's capital: a treat for the eyes and the soul. After admiring the stunning panoramic views, you will rake the cable care (extra) back to the port. 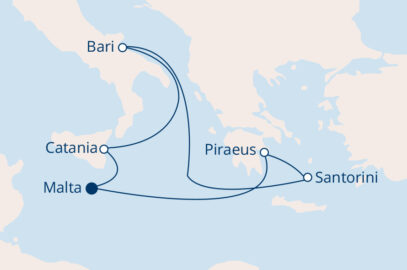