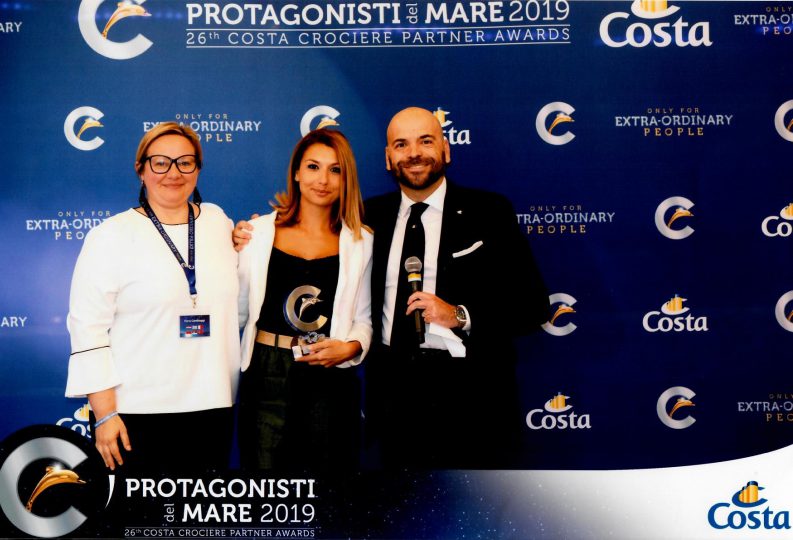 The 2019 “Protagonisti del Mare” event, the 26th of its kind, took place on board the Costa Favolosa with a short cruise between the 15th and the 19th of May with as many as 1,800 travel agents from over 32 countries. The event was truly “Extra-Ordinary” in terms of both the number of guests and the kind of activities planned on board. The event was hosted by the popular TV celebrity, Maddalena Corvaglia. Orange Travel Group, (smsmondial’s parent company) was awarded bestselling agent in the “Other Europe & Emerging Markets” whilst, our sister company, Orange Cruises Turkey was proudly awarded “Best Cruise Sales in the Mediterranean Area”.

During the Protagonisti del Mare event the cruise line discussed the new developments awaiting the company, beginning with the new ships Costa Smeralda (to be launched in October this year), and her sister ship – Costa Firenze which will come into service in October 2020.

The event was spectacular with the participation of the Spanish group namely “Music Has No Limits” who also performed at the grand pool party deck – “Extra Vaganza”.

It’s not the first time that Costa Cruise has chosen to reward us. As a matter of fact, we are honored that our work is being recognized and highlighted by these noteworthy awards.